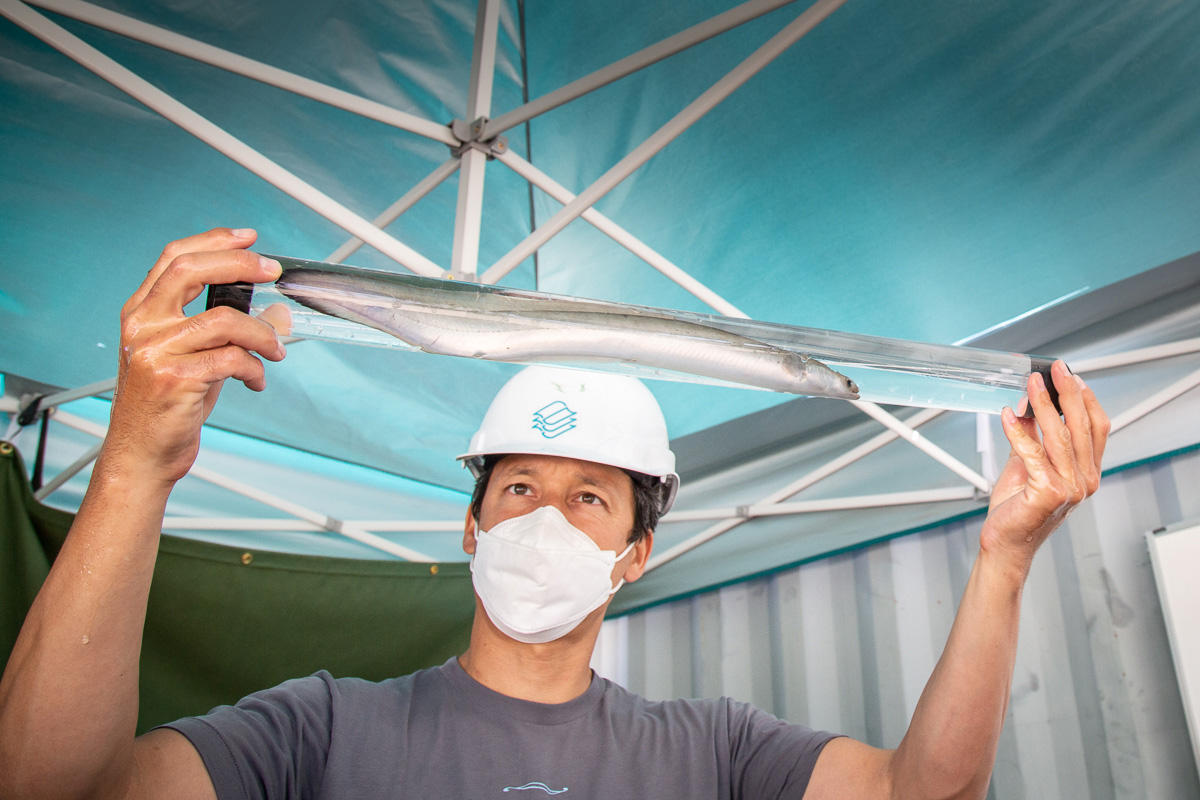 A recent study published in the scientific journal Transactions of the American Fisheries Society shows 100% safe passage of the endangered American Eel through a novel hydro turbine. The innovative turbine is designed and built by Natel Energy to protect river-dwelling fish species, including eels, while also efficiently generating renewable power. This study demonstrates the highest rate of eel survival ever while passing through a hydro turbine and shows promise that a redesigned approach to hydropower can help protect this critical aquatic species instead of causing harm.

“Compared to other migratory fish species, freshwater eels face unique risks when passing downstream at hydropower sites,” says lead author and Natel Staff Mechanical Engineer, Sterling Watson. “Their narrow body shape and strong migratory instincts make it a challenge to keep adult eels from entering turbines, and the sharp blades and converging pinch points present in conventional turbine designs can cause them severe injury. That’s why designing for and demonstrating safe passage of eels through operating turbines is essential.”

In the U.S. alone, more than 939 hydropower plants (producing 32GW of power) are within the current population range of the American Eel. This proximity will continue to be an issue for the dwindling species unless new hydropower measures such as fish-safe turbines become standard practice.

"Freshwater eels have been highly affected by the construction of dams and are exceptionally vulnerable to the hazards caused by conventional hydropower turbines. This important study demonstrates a leap forward in safe fish turbine design and demonstrates that a turbine can be designed to protect rather than imperil the species,” said Shannon Ames, Executive Director of the Low Impact Hydropower Institute.

This study from Natel was completed in partnership with the scientific research institution Pacific Northwest National Laboratory in the fall of 2021. It comprised 174 American eels divided into treatment and control groups studied at the company’s in-house hydraulic and fish testing facility located in Alameda, CA. The eels measured between 33.9 and 65.5 cm in length, comparable to many silver-stage female American Eels found along the eastern United States and in parts of Nova Scotia.

These tests demonstrated 100% safe fish passage of all 131 eels that passed through Natel’s Restoration Hydro Turbine (RHT). The Kaplan-style propeller turbine is now proven to be thoroughly fish-safe for eels, a first for the hydro industry, raising the bar for what’s possible for hydropower regarding fish protection. Furthermore, this study included the first-ever high-speed video capture of eels passing through a hydro turbine.

The RHT’s runner blades have a very thick leading edge, and sweep forward from the hub to the tip of the blades. These features, combined with the minimal gap between the runner and housing, were designed to minimize the risk of injury to fish, while promoting safe downstream passage.

“This landmark study is a huge win for aquatic wildlife preservation and the entire hydropower industry, showing that it is truly possible to preserve fish species critical to societal and ecological health while helping the planet reach net zero emissions,” said Gia Schneider, co-founder and CEO, Natel Energy.

Hydro Has Been Considerably Detrimental to Eels

Endangered American and critically endangered European eels are born in the Atlantic Ocean and migrate up estuaries and rivers along the coasts of North America and Europe to live and grow before returning to the ocean to spawn. These eels are classified as endangered in part due to multiple factors associated with hydropower development, such as habitat loss and death from hydropower infrastructure including turbine blade strikes, entrapment, rapid pressure changes and shear forces.

Conventional hydropower methods for managing nearby eels typically involve exclusion screens, bypasses or temporary shutdown at night during eel migration season, all costly methods that come with a survival rate as low as 40%. Dams and hydropower prevent the migration of both young and adult eels and contribute to a more significant issue of river fragmentation affecting all migratory river species.

With the effects of climate change spurring progress and investment in energy renewables, including hydropower, it is critical to pay close attention to any negative impacts on our broader environment or biodiversity.

The results of the American eel study are reinforced by the equally positive results of several additional scientific studies conducted with Pacific Northwest National Laboratory and with Kleinschmidt Associates. The parallel studies affirm an average of >99% safe passage of other migratory fish species including rainbow trout and Alewife through Natel’s unique turbine design.

What Does This Mean?

Demonstrated safe fish passage of the American eel through a new type of hydro turbine gives those involved in the hydropower industry, including non-governmental organizations, regulators, and hydro operators a first-time solution for reliable fish protection. Finally, there is an alternative to costly conventional exclusion screens and plant shutdowns while allowing critical downstream eel migration and in turn, survival.

Natel Welcomes Yves Rannou to Board of Directors

Natel Energy’s expanded team will continue to fuel its rapid growth and leadership position in the modern hydropower industry.

A peer-reviewed paper written in conjunction with Alden Lab and published in the Journal of Ecohydraulics.

With a name appropriately coined from the phrase “natural electric,” Natel is focused on enabling a distributed or decentralized hydropower model featuring a large number of smaller projects.